When it comes to camping locally, we’ve become creatures of habit; if the sun is shining over Newgale, that’s where we head.

But, once or twice a year, as a wider group of friends, we’ll head off for an adult-only weekend break and will book into a hotel or B&B somewhere (treat bach!).

So, this year when it was suggested we do a Saundersfoot-weekender, some crazy cat threw camping into the mix. Us vanners (affectionately referred to as the ‘VanFam’) were left scratching our heads as we hunted out a campsite that would give us the relaxed vibe of our usual spot at Newgale, but within close proximity to the bars of Saundersfoot.

We settled on ‘Trevayne‘- a campsite in New Hedges, on the coastal path between Saundersfoot and Tenby (Pembrokeshire).

We’d heard it was nice, but as it was only really somewhere to park-up, sleep and lounge in our PJs for an hour or two on Saturday and Sunday morning, we didn’t do too much research. The plan was to spend the weekend in Saundersfoot itself, with a group of other friends who were staying in caravans and B&Bs nearby, so proximity to the town was the deciding factor for us.

We arrived at about 3pm on the Friday – a 40 minute drive from home. A contingent of the VanFam had arrived ahead of us and, had bagged what was arguably the best spot on the site to assemble our commune. We set-up at the top end of Monkstone field, overlooking the sea, with views to Cefn Sidan, Pendine, Wiseman’s Bridge and Amroth.

There are hardstands with hook-up along this stretch too – perfect for a longer stay or wet weather camping.

As well as being a campsite (for tents, tourers, statics and vans/motorhomes), Trevayne is also a working farm.

There were chickens and ducks wandering freely towards the reception-end of the site, pigs in their sty, tractors doing their thing and a general ambience of a wholesome Welsh working farm.

There was also a lovely vegetable garden near the farmhouse with guests welcome to wander around and, little touches that really made the place stand out – the free jars of cut flowers being a highlight for me! 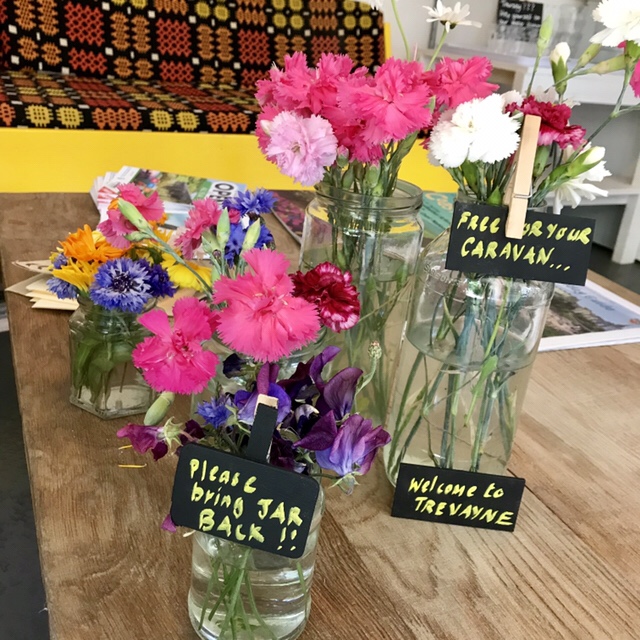 I spoke with the owner who said the farm had been in his family for donkeys years, with the campsite going back decades. He was really welcoming and appeared to burst with pride for the surroundings he was sharing with us.

There were ample shower and toilet facilities and, all were very clean. The showers were free (winner!) and had good water pressure.

There were pots of decorative flowers in the toilet block too and they were left untouched by guests – always a sign of a good site I think – respectful campers!

The beach isn’t easily accessible for very small children and those with mobility issues. We counted 161 steep steps, ambling through the tree and traversing down the cliff edge… but, if you can do it, DO IT!

Clear water and almost deserted sands. A view of the multi-coloured houses of Tenby to the right and, Saundersfoot just around the corner to the left – accessible by foot when the tide is out. It was unbelievable! An unspoilt cove nestled between two resorts, which are both over-run with tourists when the sun is shining.

Our plan to get up and out to the town early soon went out the window, once we’d experienced the surroundings.

Access to New Hedges village centre, the shop, pub and bus stop is up a country lane, probably about half a mile long. We walked it twice and it was enjoyable – it’s predominantly flat until you reach the New Hedges Tavern.

There’s also a small shop at reception, selling vegetables, some crafts and basics. The staff working there couldn’t have been more helpful.

There was a groundsman who spent the days we were there, cruising the site on a little maintenance vehicle, singing songs and greeting campers. He seemed SO happy as he worked! 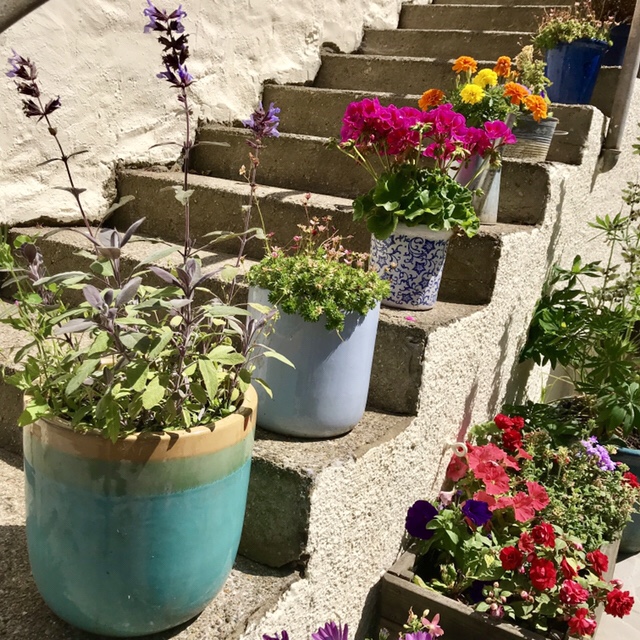 We can’t wait to take the Squatters* to ‘Trevayne‘ and, us VanFam have already booked our spot for the Ironman Wales and Saundersfoot Triathlon weekend, 7-9th September. There’s no doubt this’ll become a favourite spot for us, with this weekend’s visit being the first of many.

We paid £48 for two adults for two nights (early July weekend) for a basic pitch, with shower facilities and flowers included! Dogs are welcome too.

*Collective noun for the kids (2yrs and 6yrs).